And if I’d run I’d suffer
Only safe when I was kneeling at your feet
But then you built a wall of holy fire against me
No I won’t miss it when the angels sing
Cause have you heard them sing?
It’s terrifying.
So send my regards to god
And take a drink for me at her parties 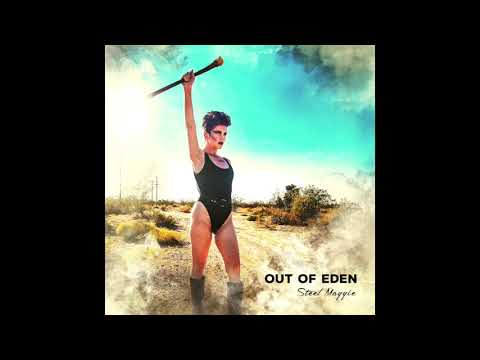 Super presence of Steel Maggie. Thanks for being here.

My name is Steel Maggie, and I’m the demigoddess of dance pop. I’m LA-based. I create bittersweet and bold synth dance pop for the minimally sane, the moderately restless, and the significantly idealistic. I hope the message in my music is an audio injection of pure inner strength and self-worth for others who listen, because that’s what it is for me.

I started training classically on piano at age 10, although I always dabbled on the little keyboard we had at home before then. My dad introduced me to almost every genre under the sun, so I had always been musically inclined. I would write short stories in high school, and I loved all kinds of music, but somehow never put two and two together that I could be writing actual lyrics and songs as well. It just didn’t occur to me that it was something I could or even should do. I started pursuing my career "late" by industry standards. When I was 18, I was feeling out of place and lost in college. I was on the psychology track, but it didn’t feel right. My best friend told me to pursue what I really wanted to do, which was get into the performing arts department and start seeing what I could do there. I wrote my first song on guitar, even though by no means was that my primary instrument. I joined choirs and ensembles, trying to find my solo voice along the way. It was rough. I was pitchy and uncontrolled. They told me I sounded like a folk artist, and that was the last straw, because I wanted to be pop. So I went head first into my vocal development, and eventually found my own bittersweet and bold pop sound that you hear now.

Out of Eden is a song about the price of freeing your soul, and the consequences of living a life entirely your own.
It’s about the choice to go the road less traveled – the road MOST you. It’s the dazzling and theatrical synth pop story about how I woke up cosmically hungover after a life of subconscious war with myself, all because I kept the peace for everyone else. I maintained such a devotion to my warning labels, a certain spirit of self-pity, but that identity had me accepting the ultimatum of mutual destruction. The idea for the song actually came in 2015, so this song is technically around 6 years in the making, I was playing with my microKorg and it the original motif carved itself out. That’s the same synth you can hear in the post-chorus interludes in "Out of Eden" now. It used to be called "Get Out." Lyrically it arose from my frustration, feeling mediocre, feeling trapped under the weight of my past, present, and future. I wrote several lackluster variations of that idea and scrapped it until 2018 when I rewrote the song. Throughout the years I had so many new melodic ideas that I knew were supposed to be in the song, new lyrical ones too. I was going into studio in December of that year and I knew it was meant to be recorded, so I sat down and put it all together. I remember the moment the chorus lyric came to me – "I can ride in line, or I can free my soul" and it was almost an out of body experience because of how far the song had come, and also because of where I was in that time in my life. And so Out of Eden was reborn.

I don’t know if it’s funny-funny but it’s a lighthearted lesson learned for me: When I was finding my own voice and really honing in on what I wanted to sound like versus trying to copy everyone else – I realized I was trying to put the gravitas of the male rock and roll vocal into female vocal chords; apparently that doesn’t read well! I loved the attitude and sex appeal and the power behind Def Leppard’s Joe Elliot’s vocals, but imitating that style made me sound so forced and fake. I just had to laugh at myself when I realized I was trying to sound like a man trying to sound like a female pop singer. And learned from that – I was able to carve out attitude and sex appeal in my own way vocally in the end.

I deal with bipolar disorder type 2, and I’m recovering from a heavy alcohol addiction. I have been sober for 14 months at this point in time, and I’m not exaggerating when I say this – but I have done more growth and gotten more done in 14 months of sobriety than the 7 years of drinking prior. The combination of a mental health disorder and an addiction is a story I’m continuing to develop and share, and I feel it is the opportunity of my lifetime to be as open as I possibly can about it.
Pre-sobriety, I subscribed to the myth of the tortured artist, that a dark and consuming addiction was the only way I could create art that meant anything to anyone. I used the alcoholic excuse that if I was sober I wouldn’t be broken enough, because I believed broken was compelling. But now, in sobriety, I’m able to use my past as a conduit of strength and inner worth, instead of my addiction dictating my art and my life. I’m even more creative now than ever, because I ended my internal war – my past and present dualities actually form the compelling story I was always pursuing but couldn’t find because I was always drowning my intuitions and creativity in alcohol. I have embraced my sobriety as a superpower.

Don’t be an agnostic regarding you and your power. Don’t pre-disqualify yourself from anything. Don’t pre-reject yourself. Whether it be feeling worthy enough to take a shower today, or from sending that scary email to someone you want to work with. I’ll go a step further: Be a zealot for you. Be a zealot for your own gospel. Refuse to spill your own blood in your own temple. Remember everywhere you go is your own holy ground.

Steel Maggie we love to talk to you. We wish you much success in your career.