Cause I've met gurus, and I've met saints
I've met monks, and I've asked at length
What kind of world should we paint?
N’ they said honey love with all your strength
So wouldya make the world, a sweeter place with me? 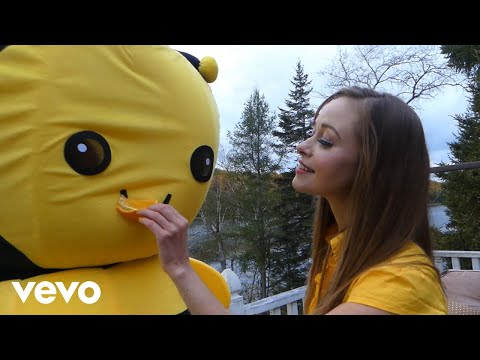 Words are missing to say how much we like Kelseidoscope. The song Wouldya Bee filled us with joy. Thanks for the visit.

We want to know more about you. Tell us about yourself.

Hi! I’m Kelseidoscope (Kelsey Eide) a singer-songwriter from Timmins, ON Canada who writes original ukulele songs to raise the vibe of the planet. One might say I am a millennial hybrid hippie (my sometimes-neurotic drive is too pervasive to identify fully as a hippie).

Though I have been singing original music in front of mirrors with random objects as my microphone as long as I can remember, I didn’t have the courage to share this with people until quite some time after high school. I’ve always been into various forms of art and expression, but I didn’t pair my love for words and creation with instruments until I decided to fill my evenings with consistent ukulele practice after teaching English in a public school in Korea. Though at the time it was a way to cope with the disorientation and challenges of moving to a different country, it turned out to be one of the greatest blessings in disguise and a key factor in my development as a music artist. After learning a few tunes on the ukulele, new original lyrics and melodies started flooding in with more intensity than ever before. It was extra exciting because I now had some ukulele skills to bring these originals to life! This became an enriching part of my life that only grew stronger with the love I started feeling for my new life in Korea. After my teaching contract was over, I did some solo travelling in Asia which naturally led to some soul searching. I realized that coming up with original music was one of the best feelings I had ever experienced, and it became clear it needed to be a big part of my life. From there it was a slow but steady progression of gaining the courage to share this with other people thanks to the support of some amazing musicians I met along the way. I can now say I love performing my original music live on a stage and it gives my soul a deep satisfaction. Though creating music became a beautiful part of my life over the next few years, it wasn’t until my older sister Kylah passed away that I realized I had to start showing up for my dreams even more because life is truly too unpredictable to not be following your dreams courageously. My sister was extremely passionate about the arts and was an incredibly talented musician, actor, and comedian herself, so I knew it’s what she would want for me and I feel her cheering me on every step of the way. It feels like our dream. I heard the heart wrenching news of her passing when I was working as a TV Presenter for an education company in Shenzhen, China and decided to not resign my contract so I could focus on original music full heartedly. Shortly after my return to Canada I had my first single, "The Way That I Do" produced and accompanied it with a music video in collaboration with one of Kylah’s friends from the Toronto arts scene. After this experience I realized the artform of music videos is an important element to me as an artist which led to the accompaniment of the Bee-filled music video “Wouldya Bee?"

The first part of “Wouldya Bee?" came to me while I was on a date at Bee Sanctuary.
Naturally, I sang it into the voice recorder on my phone where I keep tidbits of my songs to finish when the time is right. Over a year and a move across the globe to China later, that time came, and it became one of my go-to tunes I performed at one of my favorite expat hubs, The Evil Duck. After returning to Canada and being faced with a pandemic, I decided it was time to bring "Wouldya Bee?" to life which included a music video of me dancing around with a Giant Bee.

The introspective story with this song reflects my journey around my perceptions of romantic love. There have been times in my life where I struggled with balancing romantic relationships with my needs for growth, achievement, and evolution. Part of me thought romantic love and deep internal work conflicted with each other. Though I had rich and beautiful experiences with romantic love, I thought it was a distraction from making positive change in the world and reaching my full potential. Part of me really feared long-term commitment. After travelling and exploring the world I realized I should start questioning these beliefs. Through my solo travel journeys I truly practiced independence, and a lot of growth came from it. I was able to have meaningful conversations with monks, and highly evolved thinkers. It was one world-class healer that taught me that romantic love is not only in conflict with bringing our gifts to world but can add the fuel and support to make it even more powerful. The greatest spiritual growth does not need to happen when you are meditating alone but can also happen between two people who love and honor each other and want to become better people together. Though I was single when I wrote "Wouldya Bee?" it represents an internal shift that reflects my readiness for creating a beautiful, loving relationship with another person. So, one might say I wrote it for my future hubby!

When I was living in China, I saw a pub was looking for live music performers. I signed up in a heartbeat and didn’t realize until I arrive with my ukulele and flowers in my hair that this was a heavy-metal venue. I had a good laugh and performed none-the-less and it was actually (somehow) awesome!

I struggle a lot with perfectionism. I often don’t release things because they aren’t perfect enough. I am hard on myself and it can be extremely draining. However, when I take a break from the intense pressure I put on myself and allow a new song to come to me it brings me a kind of peace that keeps me fueled and thriving. It reminds me that there is no such thing as perfection and to focus on delivering what my soul is yearning to sing and keep on keeping on. This is what my next release, Dancin with my Steady; is about, so stay tuned for that!

I truly BEElieve in you and your dreams, and don’t be afraid to love deeply!

Kelseidoscope you are a great person. Incredible energy. Great music! We wish you much success and joy.